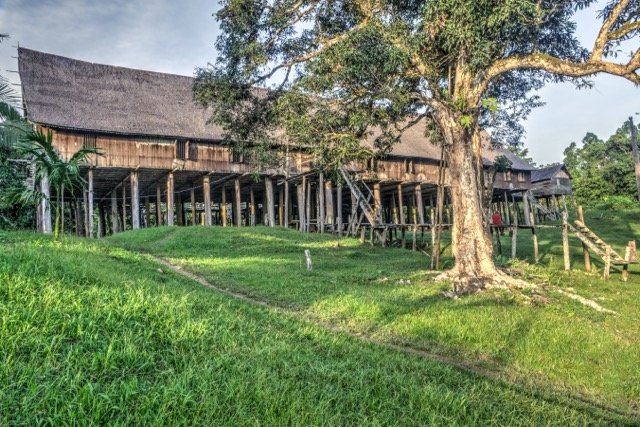 Tumbang Gagu Longhouse was founded in 1870 using the traditional Dayak method of releasing a chicken and seeing where it roosts. In an isolated area, on a rising by a pretty rivulet, the longhouse was built by traditional owners, mainly village head Singa Raja Antang bin Lambang Dandu, after a grant from the Dutch and Antang’s own personal wealth made it possible. Close to the sources of his wealth in the abundant forests nearby, strategically placed on his export routes to the port at Sampit, the longhouse became home for his 3 wives, each in her own apartment, with the other families.

55 meters long, it is built in the traditional style atop huge ulin ironwood tree trunks and other supporting poles numbering well over 200. Roughly hewn by adzes and towering 5 meters over the sloping ground, the longhouse provides protection and shelter for the families living in the midst of the forest. The niched poles leaning against the longhouse give slippery access, but may be quickly raised if trouble looms.

The longhouse remains in the hands of descendants of the original owners, though currently only two families live there. In the central apartment live Antang’s grandson, Pak Labuang and his wife, Ibu Leri, now old but determined to keep the tradition and majesty of the longhouse alive.

A village has grown up nearby and natural resources are still being mined from the abundant natural environment. Gold mining is a dirty and inescapable feature of the waterways, most large trees have now gone, traditional slash and burn agriculture is penetrating the re-growth forests, and banana plantations are springing up in their wake.

About 7 hours from Palangkaraya by road, and a further hour by speedboat on the Katingan River, the last leg to the longhouse is by foot, just over 2 hours along a hilly forest trail. Long periods of rain made the rivers misty and the trail slippery and flooded.

From the outset, losing all phone signals was a bonus. We had a leisurely time visiting in the village, seeing preparations for the brewing of the local rice wine and chatting with a village elder about his warrior ancestors. The provisions we brought were generously cooked by Ibu Leri, and eaten in her traditional kitchen.

Heavy rains and high water levels made an exciting canoe trip upstream, through dense stands of bamboo into places where you can hear the hornbill call, beyond the muddy mining waters. Skimming across pure black water in a tunnel of brilliant green and stopping for a dip in the clean water was a fitting finale to the trip.

Arrange your trip to this distant and little known longhouse through us at info@wowborneo.com.